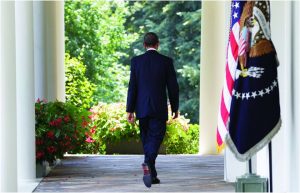 An acquaintance of mine posted this yesterday on Facebook.  He gave permission for posting elsewhere on the condition that he not receive credit.  I share it here, for the ages.

Today is the final full day in the Presidency of Barack Hussein Obama.

Unlike many of my ideological fellow travelers, I never went in for the deep waters and volatile currents of Obama-hatred. The mere fact of the election of an African-American President was and remains a triumph, and failure to credit that is failure to understand what America has been and what it ought to be. The President seemed, especially in his first term, to be a fairly standard-issue representative of the American left: horrendously wrong on nearly all policy, of course, but not alien to the American tradition in the ways that his most fervent detractors alleged. The one exception, in my perception, was his safeguarding of American national security. We may forget that in his first term, the record was more positive than negative: there were tremendous errors like the Iraq withdrawal and the failure to support the Iranian Green Revolution, but there were offsetting successes like the Abbottabad raid and the vigorous (and merciless) drone campaigns in the dark corners of the world. Altogether, I couldn’t make a case then that Barack Obama was any worse, on a strategic level, than his predecessor, and I went on the record saying so.

It was in second term that it became impossible to defend the outgoing President. The years since his reelection brought disaster upon disaster all in a rush, as America’s position in the world weakened in ways we have yet to fully perceive. What we do perceive is disastrous enough. War returned to continental Europe. Americans returned to combat in Iraq. Great-power war became a real and present danger for the first time in over a quarter-century. China seized control of an entire sea, and with it much of the world’s maritime traffic. Iran established hegemony over much of the Middle East, and deceived a White House that very much wanted to be deceived into safeguarding its atomic-weapons program. American allies in Europe concluded they would have to prepare to go it alone; American allies in the Middle East and east Asia concluded they would have to flip allegiances to the other side. American data and infrastructure became the playthings of foreign intelligence and signals services, as our domestic affairs came to resemble those of pre-Partition Poland. This is the short list.

The American hegemony that guaranteed the general peace of the world for the past seven decades effectively ended on Barack Obama’s watch, largely because of decisions Barack Obama made.

Through it all, though, one could argue that he was simply wrong, and not actively opposed to the common interests and ideals of the country. This was a strong case, especially as one came to understand the nature of the President and his team: a mid-tier faculty figure as Chief Executive; a failed novelist in charge of national security; a ruthlessly ambitious student-government alumna and then a wealthy dilettante as Secretary of State. Is it any wonder they were swiftly captured by their own narratives? Is it any surprise that they, adherents of theory and imagined arcs of history, were wholly resistant to empirical outcomes and experiential learning of the sort that eventually affected the fundamentals of even the George W. Bush administration? One might not agree with that, but it was an incapacity of means rather than morals. This excuse held firm until this final week, when the clemency granted to a wartime traitor and an unrepentant terrorist suggested that the dedication to common interests and ideals was less robust than assumed.

The verdict on the Obama years is not clear today. It will not be clear tomorrow. It will be clear someday, when we know fully what seeds were sown across the past eight years. Those discoveries will be unhappy, and we should prepare for them. In the meantime, we may understand Barack Obama as America’s version of Stanley Baldwin. The name is mostly unknown in America. He was the Prime Minister who failed to defend the peace of Europe and the strength of the United Kingdom. He watched as the dictators armed and the democracies retreated, impervious to appeals of reason and interest. The price paid for the years lost to his leadership was paid in blood: a second world war. After that war, won by other, better men, his successor Winston Churchill was asked to deliver birthday greetings for the then-aging Baldwin. Churchill, normally so magnanimous, refused. His reply is an epitaph for Baldwin — and for his heir in spirit, the soon to be former President Barack Hussein Obama:

“I wish Stanley Baldwin no ill, but it would have been much better had he never lived.”