For now, for tonight, Republicans need to keep a lid on their euphoria and recognize that while they’ve come out on top in this election, in the most important sense they haven’t won anything just yet.

This happened just as I pulled into work a few weeks ago. Kinda cool to catch it just as it happened. 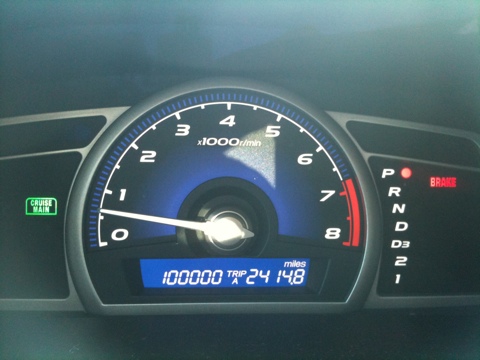 Texas already looms large in its own imagination. Its elevated self-image didn’t need this: More than half of the net new jobs in the U.S. during the past 12 months were created in the Lone Star State.

According to the Bureau of Labor Statistics, 214,000 net new jobs were created in the United States from August 2009 to August 2010. Texas created 119,000 jobs during the same period. If every state in the country had performed as well, we’d have created about 1.5 million jobs nationally during the past year, and maybe “stimulus” wouldn’t be such a dirty word.

Absent some 11th-hour revelation that he raped a college student or something, Perry will win reelection.

On Sunday, I prepared my home teaching lesson, drawing from President Uchtdorf’s talk at the priesthood session from the April conference.  Quote:

There is an important concept here: patience is not passive resignation, nor is it failing to act because of our fears. Patience means active waiting and enduring. It means staying with something and doing all that we can—working, hoping, and exercising faith; bearing hardship with fortitude, even when the desires of our hearts are delayed. Patience is not simply enduring; it is enduring well!

Impatience, on the other hand, is a symptom of selfishness. It is a trait of the self-absorbed. It arises from the all-too-prevalent condition called “center of the universe” syndrome, which leads people to believe that the world revolves around them and that all others are just supporting cast in the grand theater of mortality in which only they have the starring role.

How different this is, my dear brethren, from the standard the Lord has set for us as priesthood holders.

I am surprised, and a bit embarrassed, that I found this principle clearly illustrated through, of all things, Google’s recent homage to Pac-Man.

When I was playing the game at work, I found that I could only rarely get past the third or fourth level.  However, this evening I found where Google has stashed it, and resumed play.  As with last week, and as I am sure many players have done, I continued to apply different tactics, alternate repetitive routes, and tried to determine where I might find a degree of advantage. This evening, I learned a few things:

It’s that last discovery that led to a rather surprising realization: While it seems like going after the ghosts to eat them when you eat one of the power pellets is the obvious thing to do – go on offense, get the bad guys out of the way, earn bonus points – it doesn’t offer nearly the advantage you might think, due to various factors:

And that’s really the big thing that I picked up on while playing: Don’t lose focus of the main objective: to clear the maze of all pellets as quickly as possible. Anything that gets in the way of that is a potentially lethal distraction.

In addition, there were a few important things I realized about the power pellets:

So I shifted tactics to focus as exclusively as possible on the main objective: clear the maze, ASAP.  Not only did I not stop to eat monsters, I avoided it where possible.  In some cases it couldn’t be helped, but usually I found I was able to avoid them after eating a power pellet.  I would only try to eat one, maybe two, if the maze were nearly cleared and only a few pellets remained.  But if I felt it would be a distraction, or would put me at a disadvantage in finishing off the maze, I’d continue to try to avoid it.

Any concern I had about the potential loss in points was quickly overcome when I found I got the bonus fruit much more regularly.  And with the bonus fruit rapidly increasing in value – 200, 400, 700, 1000 points – one of those suckers would more than make up for any loss in bonus points from eating monsters.

And the result of this new approach?

Yes, I’m aware the full arcade version is radically different.  And life isn’t a video game (sorry, World of Warcraft fanboys).  But if patience, focus, exclusion of distractions can make such a difference in a silly little video game, what about life?

Now, to apply these principles to areas of my life that, you know, actually matter…