I just got an email from Bing Webmaster Center inviting me to “be one of the first to see and experience the new Bing at www.bing.com/new.” 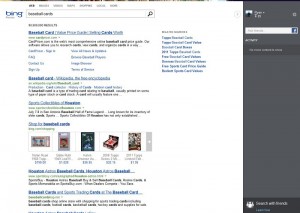 As with the prior version, it’s possible to see Facebook Likes from friends if you’re logged in.  But the real action happens in the right-hand sidebar, which offers a high level of integration with Facebook. 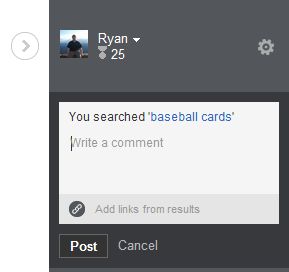 But here’s what’s maddening.  The nifty new sidebar on the beta side comes and goes.  Even when I’m logged into Facebook and searching for stuff I know for a fact my friends will have liked, the bar is gone.

Listen up, Bing.  I want very much to like you.  I really want you to pose a serious threat to Google.  I mean, you’re Microsoft, for crying out loud – back in the 90’s and 2000’s, weren’t you kind of accustomed to terrifying your competitors?  But give me a chance to really test and see your functionality.  Your best shot at presenting an alternative to Google is through your partnership with Facebook.  Just trying to outrun Google on their terms isn’t going to do it.  After going (almost) entirely with Bing for a week, Farhad Manjoo said as much:

All that being said, I don’t think you should switch. For one thing, despite Bing’s better design, Google is unquestionably the better search engine. Of the hundreds of searches I conducted in the last week, there were a handful of times that Bing just didn’t seem to be giving me the answer I was looking for. When I turned to Google with the same query, I got better results. This happened once when I was researching the name of a real estate agent; Google turned up some alarming stuff that Bing didn’t catch. Another time, I was looking for a computer scientist who’s an expert on wearable computing. I found a page and contact info for him on Bing, but I got a bounceback when I e-mailed him. When I Googled him, I found an indication that he’d moved on to a new job, with newer contact info—a page that Bing hadn’t turned up in its top results.

Google was better in other tiny ways as well. Sometimes I’d search for a place—the Peets coffee shop near my house, a specific street address—and Bing would fail to show me a link to Bing Maps at the top of its results page. Google always directed me to a Maps page, saving me a step. Bing also doesn’t offer “instant” search, the Google feature that updates results as you type. And most damning of all, I didn’t happen upon any area where Bing is clearly superior to Google. Over lots and lots of searches, Bing mostly worked really well, and one or two times, it didn’t.

The most striking thing about switching to Bing was how enmeshed I remained in the Google universe. During my week with Bing, I found myself reaching for lots of Google products beyond its Web search engine—Gmail, YouTube, Google Calendar, Google Books, Google Scholar, Chrome, Picasa, and probably a few others I’m forgetting. My editor challenged me to go without using any Google products at all. Could I survive even a day without anything made in Mountain View? I tried. I redirected my mail to Hotmail, I tried to abstain from YouTube, and I attempted to research obscure topics without using Scholar. But I couldn’t do it. Google’s just too good—even beyond search, its products are too useful, too central to the Web to get much accomplished without them. I lasted less than half a day without Google, and it was hell.

And that’s the biggest case against switching to Bing. If you’re never really going to escape Google—and if Bing is pretty much exactly like Google—what’s the point? Yes, Google and Bing are functionally identical. But Bing will need a lot more than parity with the most-popular search engine in the land if it wants people to switch en masse.

As I say, your partnership with Facebook – especially, using social signals to balance out the link graph – is where you can compete.  Based on what I heard from Duane Forrester and others at SMX Advanced last year, and based on what I see out of this latest Facebook integration attempt I think you understand as much.  But allow me to really see your new functionality in the wild.  If it’s not ready for a public test, then for crying out loud, don’t send me an email asking me to check it out.